"What lies behind us and what lies before us are tiny matters compared to what lies within us."

The "sage of Concord" was born May 25, 1803, in Boston, MA . The son of a Congregationalist minister, he attended Harvard Divinity School, 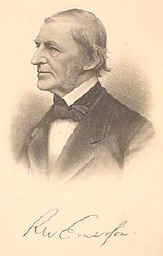 became pastor of a Boston church in 1829, experienced doubts about traditional Christian belief, and resigned in 1832, moving to Concord. He spent the next few years studying and traveling in Europe. After visiting a Paris botanical exhibition, Emerson resolved to be, as he termed it, a "naturalist."

When he returned to Concord, he began his career as a lecturer in the country's new lyceum movement. During the late 1830s and early 1840s, Emerson published the works that present his thought at its most idealistic and optimistic. His first published work was Nature (1836), which contains the gist of his transcendental attitude towards the phenomenal world. The doctrines formulated in these works were later expanded and elaborated upon in his Essays (1841) and Essays: Second Series (1844), of which "Self-Reliance," "The Over-Soul," and "The Poet" are among the best known.

Emerson became identified with the Transcendental movement in the 1840s, serving as its spokesperson, and as founder and guiding force of that group's quarterly periodical, The Dial, which introduced the public to the writings of Amos Bronson Alcott, Margaret Fuller, and Henry David Thoreau, a group who shared Emerson's philosophy. It also published Emerson's first poems, including the "Concord Hymn," which celebrates "the shot heard round the world" of the Battle of Concord during the American Revolution.

Emerson's works in the late 1840s chart a steady decline in the author's idealism and give rise to an emerging recognition of mortal limitations. The Conduct of Life (1860) perhaps best expresses his humanistic acquiescence to the reality of worldly circumstances.

Other important later works include Representative Men: Seven Lectures (1850), a series of essays on the men who most closely fit Emerson's ideals - including Plato, Napoleon, and Shakespeare - and English Traits (1856), a work hailed by his friend Thomas Carlyle as an accurate portrait of English social manners in the midVictorian era. He spent his last years in Concord, writing little, but recognized throughout America as a philosopher of great stature. He is buried on Author's Ridge in Concord's famous Sleepy Hollow Cemetery.

Self-Reliance: The Wisdom of Ralph Waldo Emerson as Inspiration for Daily Living (Paperback)

Emerson in His Journals (Paperback)

Mary Moody Emerson and the Origins of Transcendentalism: A Family History (Hardcover)

Understanding Emerson: "the American Scholar" and His Struggle for Self-Reliance (Hardcover)

A seminal figure in American literature and philosophy, Ralph Waldo Emerson is considered the apostle of self-reliance, fully alive within his ideas and disarmingly confident about his innermost thoughts. Yet the circumstances around "The American Scholar" oration -- his first great public address and the most celebrated talk in American academic history -- suggest a different Emerson. In Understanding Emerson, Kenneth Sacks draws on a wealth of contemporary correspondence and diaries, much of it previously unexamined, to reveal a young intellectual struggling to define himself and his principles.